Richmond, VA -- Legislation to close the loophole for Amazon sales tax collection in Virginia is headed to Governor Bob McDonnell’s desk for his signature. This week, both the House of Delegates and Senate of Virginia voted on a start date for Amazon sales tax collection in Virginia. The date is set for September 1, 2013. Both General Assembly bodies voted by a wide margin for the start date, 95 to 2 in the House and 37 to 3 in the Senate.

"The brick-and-mortar retailers in Virginia are deeply grateful to Governor McDonnell and the General Assembly for recognizing the severe competitive advantage Amazon.com has gained with its unfair 5% sales tax advantage," said Margaret Ballard, Vice President-Advocacy for the statewide Virginia Retail Federation and regional Hampton Roads Retail Alliance. "We applaud the 2013 collection start date which is faster than other states recently forcing Amazon’s sales tax collection."

"Our association has worked diligently on this issue for two years when our bookstores and other small members brought the Amazon loophole to our attention," said George Peyton, Vice President-Government Relations for the Virginia Retail Federation and Richmond's Retail Merchants Association. "This legislation will keep brick-and-mortar retailers in business, preventing job loss and creating jobs in stores that will now be able to compete on a more level playing field."

About the Virginia Retail Federation

The Virginia Retail Federation is the advocacy arm of the Retail Alliance and the Retail Merchants Association. The Federation's mission is to advocate on behalf of local and regional independent retailers, as well as franchise and national retailers through a network of locally focused representatives and chapters that access grass-root retail communities throughout Virginia. 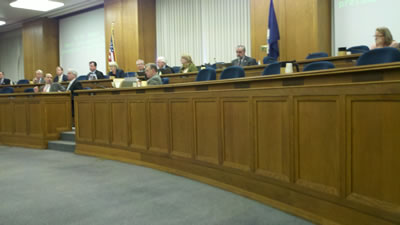 The amended bill, providing a sales and use tax collection start date for Amazon of September 1, 2013, now goes to the full House of Delegates for a vote. If passed, it will go back to the Senate Finance Committee for approval.

“This is a tremendous step in the right direction to provide a more competitive market for Virginia’s brick-and-mortar retailers,” said Ray Mattes III, president/CEO of Retail Alliance, the Hampton Roads retail association. The regional group is represented by the statewide Virginia Retail Federation (VRF). “We have fought this battle at the General Assembly for two years. We greatly appreciate the Finance Committee’s understanding that consumers need to pick winners and losers in the retail market rather than state-created exemptions for Amazon,” said Mattes. 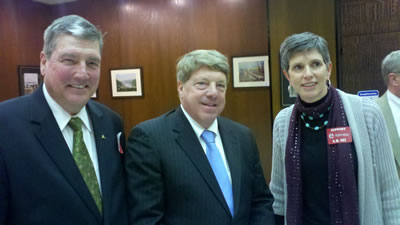 “We knew all along that Governor McDonnell was key to successfully resolving the issue in Virginia because of his economic development announcement of the Amazon warehouses and jobs two months ago,” said Nancy Thomas, president/CEO of the Richmond-based Retail Merchants Association represented by the VRF. “We are pleased that his office reached an agreement with all parties. Due to his support, we expect a strong vote in favor of the amended bill.”

Under the new language inserted into the bill, the 2013 collection start date will not take effect if federal legislation takes effect between September 1, 2013, and January 1, 2014. In this case, the remittance date will be January 1, 2014. If the bill passes the full General Assembly and the governor signs it, the language in the bill will become law and not a ‘voluntary’ agreement with Amazon. This will preclude other retailers from trying to implement similar tax loophole schemes.

About the Virginia Retail Federation 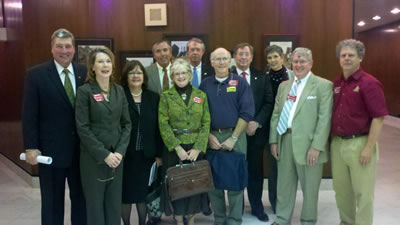 The Virginia Retail Federation is the advocacy arm of the Retail Alliance and the Retail Merchants Association. The Federation’s mission is to advocate on behalf of local and regional independent retailers, as well as franchise and national retailers through a network of locally focused representatives and chapters that access grass-root retail communities throughout Virginia. 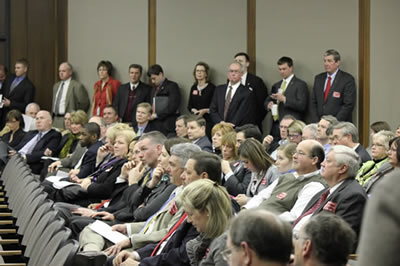 Retailers listen as the Senate Finance Committee debates SB 597 which would close the Amazon tax loophole. Retailers traveled from across the Commonwealth and included Virginia Retail Federation (VRF) members from Richmond and Hampton Roads as well as other areas.

“The legislation will create a more level playing field for Virginia retailers,” said Senator Wagner. “Companies with a physical presence in the state should all play by the same rules,” he said. 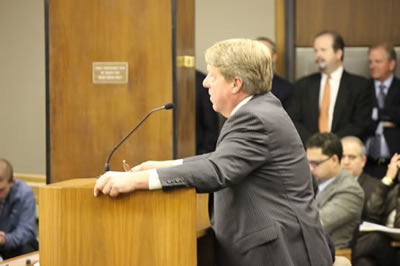 Senator Frank Wagner, the patron of SB 597, passionately testifies about the merits of his bill in front of the Senate Finance Committee. The VRF thanks the Senator for his efforts on this issue.

Current Virginia law says that companies, including their subsidiaries, that operate warehouse or distribution centers are required to collect and remit the state sales tax. Amazon.com is the only known retailer in Virginia that has created a separate distribution subsidiary for the presumed purpose of avoiding the sales tax obligation. When Amazon or other retailers do not collect and remit the sales tax, consumers are legally obligated to remit the use tax on their annual state income tax filing.

“We are extremely pleased with today’s vote,” said Rob Shinn of the Virginia Alliance for Main Street Fairness on Tuesday. “It demonstrates the strong will of state legislators to close the loophole and treat all retailers on a consistent basis.” 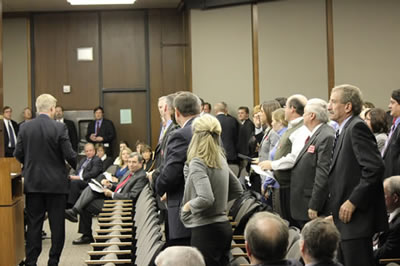 Retailers stand in support of SB 597 during the Senate Finance Committee meeting. SB 597 would close the Amazon tax loophole and level the playing field for retailers in the Commonwealth.

Amazon maintains distribution centers in about 13 states. They currently operate one in Northern Virginia and will operate two additional centers in central Virginia in the near future. Amazon has entered into voluntary agreements with four states – California, South Carolina, Indiana and Tennessee – to collect the tax as early as this September 1. Pennsylvania is also requiring online retailers with a physical presence to collect and remit the sales tax by September 1 of this year. Other states including Arizona and Texas have assessed Amazon notices of delinquent taxes stemming from similar corporate structures. They acknowledge physical presence in Washington State. Legislation is also pending in several other states. 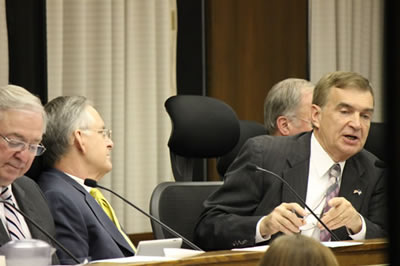 Senator Emmett Hanger speaks in favor of Amazon loophole closure during the Senate Finance Committee meeting on February 7. In years past Senator Hanger has carried bills to address the unfair tax advantage that internet corporations enjoy.

“States are moving quickly to address this loophole,” said Shinn. “If the issue plays out in Virginia similarly to how it has in other states, the state can get both the jobs and the uncollected tax revenue.” The official legislative Fiscal Impact Statement has determined that Virginia could recognize $24 million in uncollected tax revenue on an annual basis if the bill passes.

The Virginia Retail Federation is an important member of the Alliance for Main Street Fairness (AMSF) in Virginia which is a coalition of retail companies and organizations dedicated to promoting the fair taxation of retail goods in the Commonwealth.

The Virginia Retail Federation, Retail Alliance’s statewide advocacy arm, garnered a big win for most of its member in Governor Bob McDonnell’s proposed 2012-2014 budget.  Due to the VRF’s heavy lobbying on elimination of the Accelerated Sales Tax (AST), the threshold for retailers eliminated from paying the tax is lifted from $5.4 million and under  in taxable sales to $26 million and under in sales and/or purchases in the previous year.  In his press release on the issue, Governor McDonnell quoted George Peyton and Margaret Ballard,  VRF government affairs specialists.

The VRF will work with Governor McDonnell and his staff to pass this section of the budget and will continue to advocate for total elimination of the unfair Accelerated Sales Tax.

Email: This email address is being protected from spambots. You need JavaScript enabled to view it.

Proposal Exempts Another 1,407 Retailers from Making Accelerated Sales Tax Payments Next June; Means 95.6% of Originally Covered Retailers Will No Longer be Under Policy

Speaking about the budget action, the Governor noted, “I have always opposed the policy of playing budget games with sales tax receipts. The accelerated sales tax can feel to retailers like a ‘double tax.’ It penalizes Virginia retailers and merchants and skews states revenues. It is bad policy and it needs to be eliminated as quickly as we can.  Last year, in the middle of the General Assembly session, I recommended significant relief for thousands of dealers from the accelerated sales tax. Now, when the General Assembly acts on this proposal, we can continue that progress and remove 95.6% of all initially impacted retailers from this policy by next June. We need to get this anti-business policy off our books and I hope the General Assembly will agree with me and support this budget proposal.”

George Peyton and Margaret Ballard of the Virginia Retail Federation commented on the Governor’s budget action remarking, “Members of the Virginia Retail Federation applaud Governor McDonnell's funding in his budget to eliminate the accelerated sales tax payment for over 95% of Virginia retailers. This annual onerous tax payment has been a burden for many retailers during these challenging economic times.”

The Governor’s proposal recommends that the threshold for dealers to be subject to the payment be raised in June 2012.  The new threshold level will be $26 million in sales and/or purchases in the previous year.  This proposal is built into the Caboose Budget Bill and will exempt another 1,407 dealers from making accelerated sales tax payments next June.  Fiscal year 2012 general fund revenues have been reduced by $50 million to account for this provision.

A Sale is a Sale